If you are looking for some creative ways to get involved in reading your Bible I will show you two very useful apps you can download on your phone or I-pad! 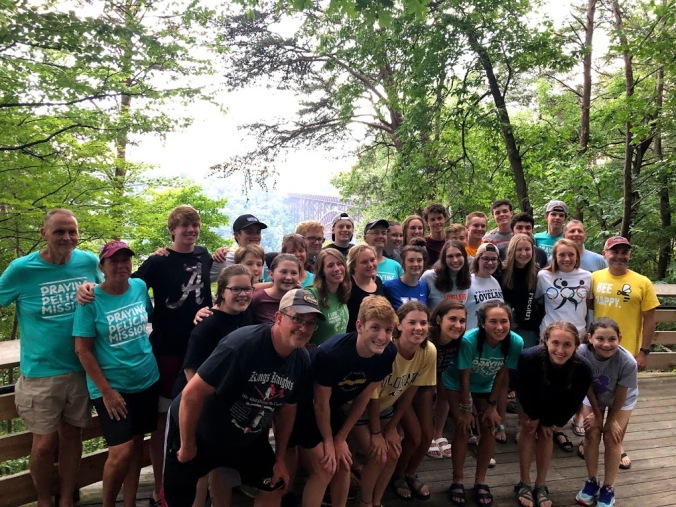 On June 21-28, 2019 the Epiphany UMC Senior High youth group went to Clendenin, WV. for our Summer missions trip. The story in Clendenin was very similar to the events in Rainelle. In 2016 there was catastrophic flooding that significantly impacted the town. We were there to help continue the efforts to bring restoration to the town in some small way.

We left for Clendenin earlier than usual. Instead of arriving on Saturday we arrived on Friday so that we could participate and help with the town’s Homecoming Festival. This is a festival that celebrates the hope and restoration the town has experienced since the flood. During the festival we did a variety of things from going on rides, hanging out at concerts, eating fair food, running and serving in a 5K race, serving at a hot dog stand that had A LOT of traffic, and walked in a parade. All the funds that we raised went to the local United Methodist Church. We also learned what a WV hot dog consisted of. It is a hot dog with coleslaw and chili on it. It is actually very, very good! We also had an incident when one of our teens had an asthma attack after running in the 5K race. We took a little trip to the hospital and everything turned out well.

On Sunday we attended the Clendenin United Methodist Church. It was a great experience. The message was really good and the pipe organ was amazing. The people were really kind and receptive to our team.  In the afternoon we headed out to a home in which we were invited to go swimming in the river. We had a lot of fun.

The work days were split between three sites. The first sight was an old church building damaged by the flood that the Praying Pelican Mission bought to renovate into a mission site for teams to use as their home base. We had a team of teens work there to do cleaning, dry walling, painting, and yard work.

The second site was a home that needed a lot of help to restore it. The teens did a lot to clean out the home and put a lot of the belongings into storage so that we could get into the house and do a variety of things such as cleaning, painting the shelves in the kitchen, put in a new bathtub, some basic plumbing, electrical and dry walling. The teens accomplished a tremendous amount of work at this house but it would need more teams to complete the job over the Summer.

The third site was a home out in the country that also needed a lot of help. At this house we were able to clean up a big trash pile that was in their yard, rip out the flooring in the living room and replace it with plastic covering, rip out the counter and sink in the kitchen and replace it with a new one, and put a temporary covering over a corner of the house that had a lot of damage to it.

Overall the teens did a tremendous job of working well together and doing a lot of work. I received a lot of complements from our Praying Pelican leaders on the work ethic of our teens and adults. I can say enough good things about them.

Some of the fun things that happened during the course of the week was that we celebrated two birthdays! One with a cake and one with donuts! We had some new adults and teens with us as well as our Senior Pastor and her husband so it was important that we teach them our classic games we play. There was a lot of Euchre going on too. The week was capped off with a very physical game of hockey using pool noodles for sticks.

On Thursday we went white water rafting with ACE Adventures. We went down the New River Gorge at a different spot that the previous trip with the Junior High. We were able to go down the part of the river that had Class 5 rapids. Everyone survived! We had a few who fell out of their rafts but made it back to safety just fine.

Our last night was very memorable as many of the teens shared how God has been working in their lives throughout the week and how they were going to apply what they learned as they head back home. I always emphasis that mission is an attitude that we instill within us everywhere we go. It is not just a one-week trip out of the Summer. We need to be missional everywhere we go. Our Seniors said their parting words as they are about to begin a new chapter in their lives as they are about to head off to college. Many of the other teens shared from their hearts how God is working through them.

Overall this was another great trip with Praying Pelican Missions. I would highly recommend them to any youth group. I love that they connect you to a local church. There are a lot of benefits theologically to this in that we are always an extension of the local church as we go out and do missions. Our leaders were amazing. In the small world we live in I found out that our trip leader lived in the very towns I lived in as well as played football with my wife’s cousin. Our team bonded really well with the Praying Pelican staff. I love leading these teens and seeing their spiritual development over the time they have been in the youth ministry. Many of these teens have been with me for a long time. Their spiritual growth and work ethic are amazing. I would take them anywhere, locally, nationally and internationally. They inspire hope for the future of the church!