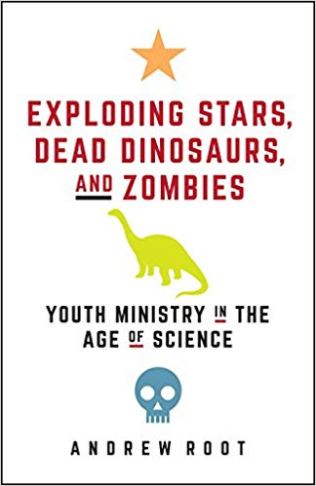 Whenever I read something form Andrew Root, I know it is going to be deep and I am going to learn a lot. His latest book “Exploding Stars, Dead Dinosaurs and Zombies: Youth Ministry in the Age of Science” did not disappoint. Andrew begins the book with a story about a youth pastor and his teens who ask some deep questions about trying to relate faith to science.  Andrew makes the case that Science and Faith are not diametrically opposing fields. Instead he shows how Faith sometimes oversteps its boundaries by forcing the Bible to speak for Science, and how sometimes Science oversteps its boundaries by making Faith claims. So Faith and Science are not opposed to each other but they can not take over one from the other. Instead, Andrew Root sees a significant overlap where Science and Faith can learn from each other.

Andrew makes a case for theistic evolution throughout the book. He shows how Creationists are forcing science into the text of Scripture and misreading it for how it is supposed to be interpreted. But he also shows how some scientists use their field to make comprehensive faith claims that overstep what science is supposed to do. Andrew also shows how many of the sciences were birthed out of Christianity as Christ-followers wanted to study different aspects of God’s creation and discover how it expands and complements our faith.

Andrew also tackles an interpretation of Genesis 1-2 in light of other pagan creations stories that Israel would have been familiar with. Israel took these stories and crafted their own which showed a personal God who wanted to have  a relationship with us as opposed to a Zeus-like god who created humanity to serve the gods.

Much of what this book tries to do is show how, with a proper understanding of what science and faith are about, they can complement each other. Too many teens are taught the Bible as if it were science, only to leave for college, take their first Earth Science class, and walk away from the faith seeing many of the contradictions that they were brought up to believe as “Science”. We need to have a better understanding of the sciences and how they can help us have a stronger faith. And we need to allow our faith to speak when considering what we can learned from the sciences. Throughout history there have been several times where the church believed something as fact because of how they were interpreting certain passages in Scripture only to have science show that that particular view was wrong. An example was that many believed that the earth was the center of the universe and everything else revolved around it, until Galileo came along and proved that the Earth actually revolves around the sun. This rocked the world of the church and it caused them to eventually rethink how their theology speaks to the truth of the cosmos. I believe we are in a similar time where science has discovered that the earth has actually been around for billions of years and we have evolved over time, yet there are those in the faith community who oppose that based on their view of a literal translation of Genesis 1-2.

This was a fantastic book and I would highly encourage anyone who is curious about the relationships between faith and science to read this. If you are a Young Earth Creationist my bet is that you won’t like this depending on how firm you are in interpreting Genesis 1-2 as literal science. But this book may help you to see a different perspective in how faith and science can live in harmony with each other and actually complement each other.