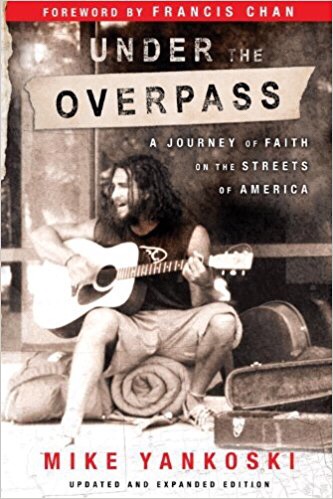 I just finished Under the Overpass by Mike Yankoski. This book details a journey that lead Mike to spend several months of his life living on the streets of major cities throughout the country. Mike states that according to the National Coalition for the Homeless, the United States has more than 3.5 million homeless people at any given year.

Mike began his journey by first finding a traveling companion. Sam signed up for the challenge and off they went to their first big city, Denver. They spend about a month in each city they travel to. This gives them time to acclimate themselves, and figure out how to find basic resources for themselves. They go from Denver, to Washington DC, Portland, San Francisco, Phoenix, and San Diego. These two catalogue their journey as they panhandle for food, make friends with other homeless people, encounter danger, dehydration, hunger, and rejection from others. They both come to terms with the safety and security that we all try to strive for so that we would not normally ever have to come in contact with homelessness. Their experience helped to humanize those that we typically ignore or dehumanize.

Scripture became real to them as they were reminded that Jesus led by example in caring for the poor, the sick, the diseased and the sinner. They also realized the importance of taking care of peoples’ basic needs instead of just preaching at them. They understood that they needed to see the image of God through the homeless just as much as anyone else they would encounter.

Mike and Sam had quite the experiences with different types of churches and missions. Some where positive and some where not. It was hard to read some of the stories of churches behaving badly toward the homeless. But it was also a reminder that of all the places that a homeless person ought to find help it should be a church or mission that claims the name of Jesus.

The final chapter of the book details Mike and Sam’s assimilation back into their “normal” lives. They soon realized that their experience changed them forever. They quickly became uncomfortable with comfort. They began to see how many in the church have an easy time enjoying the blessings that they have but forget to share their resources with others. When you lack nothing and have just about everything you want, that in itself becomes a trap that can close ourselves off to the needs of the world and our ability to help. Also, they realized that on the streets they learned what it meant to really depend on God to help meet their basic needs. And finally, they discovered that if you truly understand how much God loves us while we were still sinners, we would be more intentional about sharing his love with others, even in the little things: a smile, a drink, some food, recognizing someone’s own humanity and dignity. We are not supposed to be about our own feel-good, warm-fuzzy religiousity but instead we are supposed to go out of our comfort zones and love others just as Christ has loved us.

Another great resource to help understand poverty is A Framework for Understanding Poverty by Ruby K. Payne.

One thought on “Stories of Homelessness throughout America”